Episode 1 will be released on January 5, 2020. Join the mailing list here to be in the know when it's available. While traveling aboard a container ship from North Carolina to Sri Lanka, Tim Christensen worked on projects in various media ranging from photography to writing to printmaking. It's a part of a long-term project, and his words are best when describing it.

When I googled “container ship passage Australia” 2 1/2 years ago, it was with the intention that I would create a body of work that would chronicle an odyssey. I had been asked to present my pecha kucha talk, “Art in the Holocene Extinction” in Cooroy, Queensland, and from this invitation, I created a “mega-transect”, a study of the Earth’s systems that would come to span the major oceans, 6 of the 7 continents, and take me around the world using about 5 gallons of crude oil.

Looking out at the hazy Red Sea from the wing of the bridgedeck. Photo by Tim Christensen. 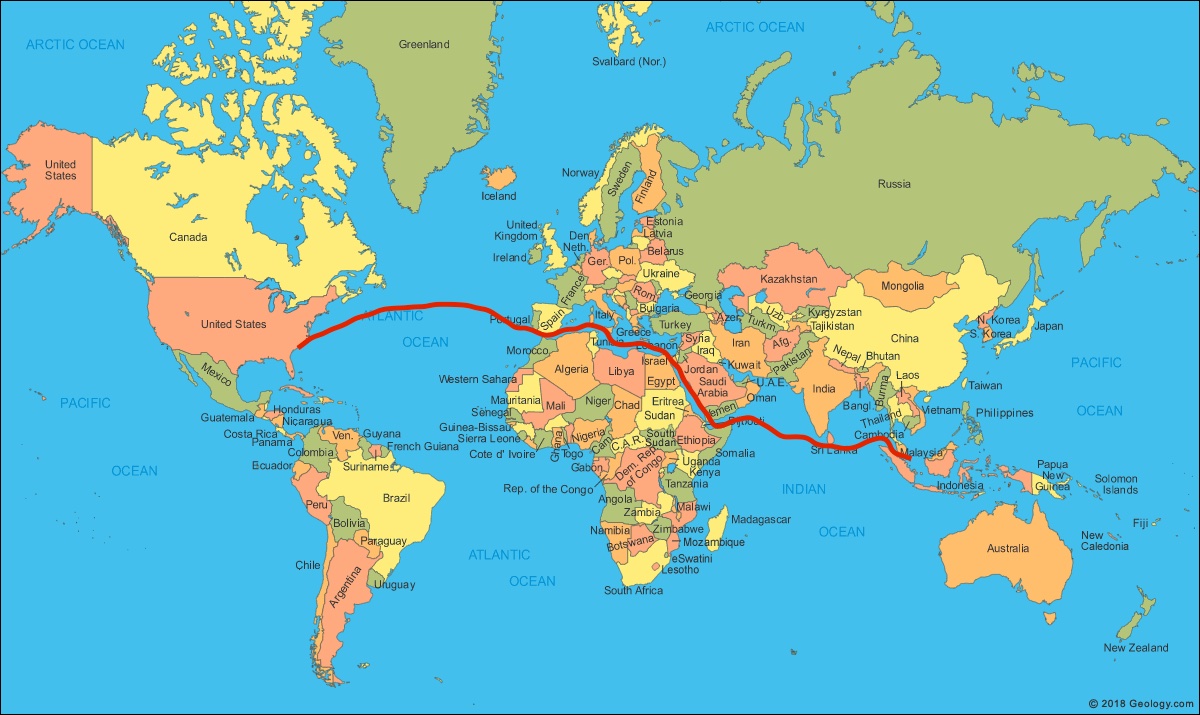 Tim's route on his second cargo ship journey took him along this red line. His destination was Malaysia.

I would experience the heat of the Sudanese Red Sea, the wet of the Bornean Jungle, the loneliness of the Pacific, the space of the Australian bush, and the chaos of living in places where everything is unfamiliar and new. I would experience hurricanes, typhoons, pirates, state security services, dingos, snakes, insects, flying fish, whales, sharks, sea snakes, macaques, leeches, superstition, inescapable reality, and plastic.

I would see rare birds, rare sea creatures, rare atmospheric events, rare primates, and catch rare glimpses into lives—foreign and internal. In setting out to experience the world’s most remote places, I committed to recording my experiences in as many durable, tangible, and recognizable ways I could think of.

I had two rules for this project: “Make everything possible as new as possible,” and “Always say yes." The resulting work reflects my observations of subjects internal and external. I looked at everything as equally valid and important, from traditional math-based scientific data to more abstractly emotional and philosophical ideas.

I have used infinitely durable porcelain and universal visual language (art!), to communicate what I saw across time, language, culture, and geographic barriers. These artifacts are designed to last tens of thousands of years and be accessible to anyone or anything with an eyeball and the ability to think abstractly.

I conveyed the intimate daily experiences of the first voyage in that most personal of ways: by writing a book. Reflect, Adapt, and Persevere, co-written by Carri Lange and bound by Anna Low, was made using archival paper and inks, a self-created font of my handwriting, original drawings and intaglio prints, and a combination of ancient and modern silk screen printing processes and materials.

During my travels, I used durable and portable etching plates and ancient drypoint to record my environment, often en plein air, capturing each day’s most compelling event, and later learned intaglio printing to create multiple images of what I saw. In all cases, I have “shown my work”, allowing the growth in the way I express myself to be evident alongside that which I was expressing.

I reached for newness on every level in order to shake myself out of my old patterns, and to better recognize cultural biases. I feel this allowed me to be more open and less guarded in the widest possible variety of situations. Lastly, in all things, I strove to always be better, trusting my need to grow and knowing that settling for “less than perfect” will achieve more than the entitled inaction of waiting for perfect consistency.